.
As bff stacie mentioned here, we had a fake wedding on the weekend of her birthday gala in Costanoa. It would have been perfect if I hadn't passed out at 8pm on the fake wedding night. Most of her nearest and dearest were there and some really couldn't tell if we were serious about being a real couple or not.
Now.. let me give you a little background on our coupling... a few months back, an executive at my workplace essentially called me a lesbian to the other members of the executive staff. She basically said that I had a girlfriend (bff) that I should "make out with in private"- I am not sure she was really thinking clearly announcing this in a management meeting. It was so appauling and over-the-top, that I was just mostly in shock, as if someone in my highschool class was playing a joke on me or called me a name and I had to laugh it off. After about a week, it truly set in. It set in that maybe I wouldn't progress in the company, now that the other members of the executive team thought differently of me... maybe my chances for growth were severely damaged. Needless to say, I've tried to move past it all, but what lingers is the joke between bff and I - the joke that we actually are lesbian lovers. ahhh, bitter - happy.

Anyhow, bff''s step-mom and dad were at the weekend festivities and I loved hanging out with both of them. When we were out to breakfast the first morning, I completely fell in love with a ring that her step-mom was wearing. I talked to her about it and she said she would try to find me one in her travels. A few weeks later, she sent it to bff to give to me and bff said- "she sent it as a wedding gift. Isn't it great being married?" 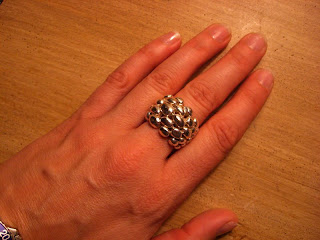